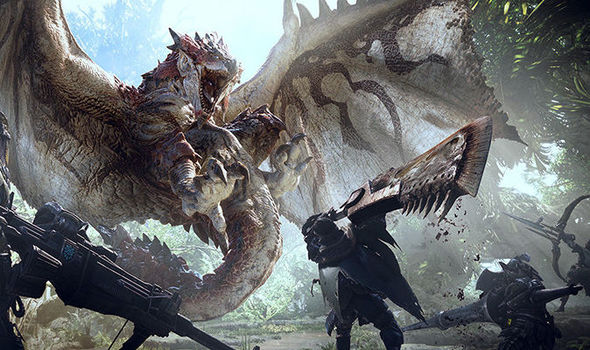 Without counting the spin off series, Monster Hunter: World is the 5th version of the Monster Hunter series. For about 14 years now, it has been one of the most commercially successful franchise in the video game platform. Staying true to its predecessors, it keeps the nostalgic feeling that keeps players slaying away. One huge difference from the early versions is the updated modern graphics and mechanics during game play.

We would compare this game as the “Call of Duty” of the Japanese’s franchise. Although, instead of using fancy modern weapons you would be using melee sword weapons mixed in with martial arts during combat.

One of our first points we’d like to point out is that this game can be a little grindy. If you don’t mind racking up hours on a video game, then this shouldn’t be an issue. One of the reasons why, is since is has lots of crafting items, it can be overwhelming. We played for about 100+ hours and still run into items that we have no clue what to use for and probably never will. We’re sure there are players out there that have figured out what every Item is for but the absurd amount of content the game provides can be a little too much.

So why is Monster Hunter: World successful? Let’s dig in…

While Playing Monster Hunter World, you will run into weapons that all have different move sets. With Fourteen different types of weapons and styles that change your controls, we can see how players can get sucked in to the different options of gameplay styles to choose from. The amount of difference in each weapon’s unique styles makes it feel as if you’re playing a totally different game with different mechanics.

Many of these weapons have their own combo, secret combos, and special attacks that you can figure out while using them. Aesthetically, the mechanics of these weapons are very satisfying to see when in combat. That alone gives a boost of gratification while laying down the DPS.

The pace of the game varies on the play style. You first must walk the plane and go Monster Hunting. It can take up a few minutes before you find one. Once you do, specifically bosses, it can take up to 20-30-minutes per battle. Trust us, every minute is filled with excitement. Of course, the more players attacking, the faster the monster dies.

There are times where players need to rest to restore their HP. This allows the monsters to run away and heal up. Therefore, we recommend playing with friends or a party, so you spend the minimum time killing a boss.

Monster Hunter World’s game pace is satisfying to those who want to jump right into battle. Although, if you’re not into that (Who really isn’t?) you can always stop, slow down, and strategize.

When in battle, there are many factors that will be required to maintain your survival. Strategy is important part of the game as you need to be tactical on how you will approach a monster. Timing, intuition, and knowing when to use your combos is going to be the one factor that helps you slay the monsters.

One thing that we notice is the versatility of each monster. Specifically, when it comes down to bosses, you will have to figure out where each one’s weak points are located. This alone deters the game from reaching the boring rinse-and-repeat model.

Knowing where to hit a monster’s body part will give different reactions and result in greater or less damage. Figuring out where to hit the monster consists of trial and error and strategizing ahead a time will give you the upper hand.

The AI world of Monsters Hunters World is one of a kind. Each AI has a purpose and you can interact with them all. For example, the little critters in the bush just doing its thing will have little fun facts when you examine them. Some critters can even be kept and used as pets for the heck of it. Everything, even the things you may find useless has a purpose.

One of its most important features for the AI’s is the dynamics that is adds to the game. Even when you’re blasting your weapon trying to bring down a boss, there’s an AI there to put the scene together. Our favorite feature is the fact that the boss monsters can fight each other. That’s right! AI vs AI. A cool and unique concept that we haven’t seen in any other similar game.

You can play with friends or parties on trips when going Monster Hunting. This is an important part of he game as the more players attack a monster, the faster it dies. We believe that match making part of the game is the best part of it. Sure, you can play alone and party up, but when you go with friends it can turn to hours of fun. We strongly believe the online experience in this version is much better than the versions before. There is a co-op game mode that you can play and have friends to help complete tasks and quests.

For those who get overwhelmed when there is too much content to go through, then we don’t blame you if you avoid Monster Hunter: World.  The world that is created and the vast amount of content in this game can make anyone stay away, but one thing is for sure, you won’t run out of things to do in this game. This is not like other games where content is kept to a minimum and all you do is battle.

One of our turn offs are the abundant of menus and interfaces that just overwhelm the eye. We don’t want to see the whole screen filled up with menus. It maybe a terrifying experience when you want to look up an item just to find out you must go through hoops of menus to get to where you want to be. We understand the concept, but there is a huge learning curve to get yourself acclimated to the menus.

Overall, we believe the creators of this game put a lot of thought and hard work to achieve all the content provided in the game. If you don’t mind the grind and the endless things to do (besides hunting monsters) then this something you should check out.